The Royal Cloth Factory in its original state (1928)

The royal summer residence of San Fernando de Henares came into existence during the 18th century as a response to insufficient Spanish industrial production. King Fernando VI, faced with foreign appropriation of colonial commerce, decided to promote the creation of new industries. He thus started building work for a new city on Torrejón de la Rivera lands, a city whose centre was to be a woollen cloth factory.

Construction was begun on the textile factory. Around the factory various buildings were built for use as a city hall, church and housing for the factory’s workers.

The new city’s governor, Ventura de Argumosa, travelled to Europe to recruit workers and specialists in the manufacture of woollen cloth, hats, velvet, cloth and paper.

To supply the new city, agricultural areas were also created and cattle raising was introduced. These two elements became the driving force of the city’s economy during the 19th century. 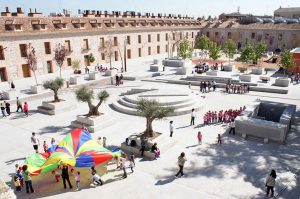 In the mid-twentieth century, San Fernando de Henares began to experience the same industrialisation process as the rest of the country and became an important urban centre within Madrid’s industrial belt. The population expanded with the arrival of immigrants from other provinces of Spain. Agricultural and cattle-raising activities disappeared, and residents focused on industry and the service sector.

Today San Fernando de Henares is a strategically located city surrounded by areas of economic importance, offering its services to travellers from all over the world.

things to do in Madrid (Article by Axel Hernborg)